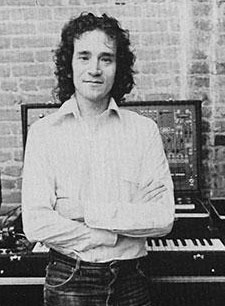 Stuart Diamond in his studio.

To tell you the truth, I was just sitting there. Suddenly a brigade of knights on horse back came charging toward me. There was no escape. I sat stunned in my seat. A few yards before converging on me, these men in armor were instantly transformed into a troupe of fairies - fairies that spun and danced themselves into streams of light. By the time they surrounded me I was quite pleased.

This sort of thing happens when Stuart Diamond and his Electric Diamond Ensemble throw a concert - as they did recently In Manhattan's Symphony Space and in Little Carnegie Hall.

The composition that sent visions of knights and fairies prancing abut the concert hall was composer Diamond's "Dance of Merlin." It followed "Lyric Images," which moments before had filled the hall with imaginary skeins of yarn tumbling, Unraveling, looping around the audience, passing between our chairs, tying us up in knots, tossing us loose.

Imaginative, visual, linear music is what I'd call it - the kind of stuff Tolkien might have come up with if he'd used a piano instead of a pen.

Diamond's music happens with keyboards, percussion (Michael Lauren), and a Lyricon. The Lyricon is a still-rare instrument, usually associated with jazz. Physically it looks like a flute fitted with a clarinet mouth piece and wired into synthesizers. Phonically it can sound like just about anything you want It to: harpsichord, flute, bassoon - or beast.

Yes, beast. And beast it was in Diamond's "Beauty and the Beast" which, in its world premiere, crowned the concert in Symphony Space. From Beast's first bellow the piece is established as the most remarkable of the three compositions. It opens with Beast flailing in darkness. His ferocity flies at you from every direction - so madly that you expect Beast to crash into himself and smash piece and audience to smithereens. Somehow, he doesn't. Enter Beauty (soprano Sally Jo Anderson) with her wordless vocabulary that is alternately haunting and soothing, tender and strong. When the unlikely duo moves from solos into duet, Beast's ferocious troubling becomes tremulously gentle. The result is some times heart-wrenching.

Diamond uses the electronic idiom in a way that makes you feel he's taking you home by a new route. And whether you're the type who walks home in wingtips, Adidas, or sandals, it's hard not to believe Diamond can get you there. He's a mediator of sorts, a classical composer who's ushering traditional Western music into the electronic age. And he's been at it for decades.

Back in 1970, the atonal trend established among contemporary classical composers In the '50s continued to cool music scores. But Stuart Diamond, maverick or oblivious, was busily penning romantic, melodic compositions - and plugging them into his synthesizers. The result was a music that was indeed far out ("a wonderful trip into the asteroids," according to Variety), but in no way distant or detached.

Diamond likes being unusual, but not inaccessible. "I don't believe a composer can live in an Ivory tower," the wild-haired composer told me a few days after the concert. "Music must function as entertainment before it can be great art. There's a dynamic relationship between composer and audience, and if the audience isn't involved you don't have a chance to do anything with your music."

It seems Diamond is an elusive nightingale out on a limb, he can't be caged with the classicists, not with the disjointed mechanistic bleeps and bloops still associated with serious electronic music.

The Diamond difference may have some thing to do with the intent behind his composing. We talked about It in his Manhattan music studio - a completely non-classical room spilling with masses of wires, buttons, and levers."My concern," says Diamond, pushing back his wire-rims with his thumb and middle finger, "is to bring the audience to a philosophical position as a result of listening. I'm more concerned with that than with grinding a stylistic ax. Once you've hooked an audience's imagination you can take them on a journey in such a way that creates certain images. You can bring them to various emotional effects, including a feeling of transcendence. To be able to accomplish this is the art, and that's what music is about for me."

While studying music at Haverford and Sarah Lawrence Colleges, Diamond also studied philosophy. The more he talks the more it shows. "There are several levels of what I'm trying to accomplish. The highest level is an epiphanic notion. I'm not pretentious enough to say that I'm touching people with God or that God has to speak through me, but I think of great art very much as a healing thing. I think that some change in perspective is valid and is what audiences seek. Even if you're performing a tragedy, like "Romeo and Juliet," you can help the audience walk away feeling enriched, aware of life.

"I try to be very positive in my statements. I used to write negative pieces, then somewhere along the line I began to write positively - just an expression of what I wish to express in general in my life."

Diamond says he's always been a romantic and melodic person. he started playing wind instruments at age 9, and from that point on was very conscious of line. At age 18 he began composing: "The first thing I wrote was a title page: 'Stuart Diamond, Symphony No. 1. I never got beyond the first movement of that one. It was dreadful, of course. But it did have a strong melodic line."

After six years at Haverford and Sarah Lawrence, Diamond plunged into New York's Lower East Side and took it by - well not exactly by storm. In fact, his first two years were touch and go. "I played bassoon professionally, and wrote music textbooks and magazine articles to support my composing. What a way to spend my youth!" he chuckles, slapping his forehead, crooking the wire-rims. "But things got better. There I was, struggling to squeeze in a couple of hours of composing a day when, out of the blue, I was discovered by the Criterion Foundation. Criterion had been looking for composers different from the academic tradition. A friend of mine played a tape of my music for some foundation people and as a result they offered me total financial support or several years. The grant came to me out of the sky. I hadn't even applied for it. A little Cinderella experience."